A Conversation with Mike Floss: Music, Inspiration, and Change 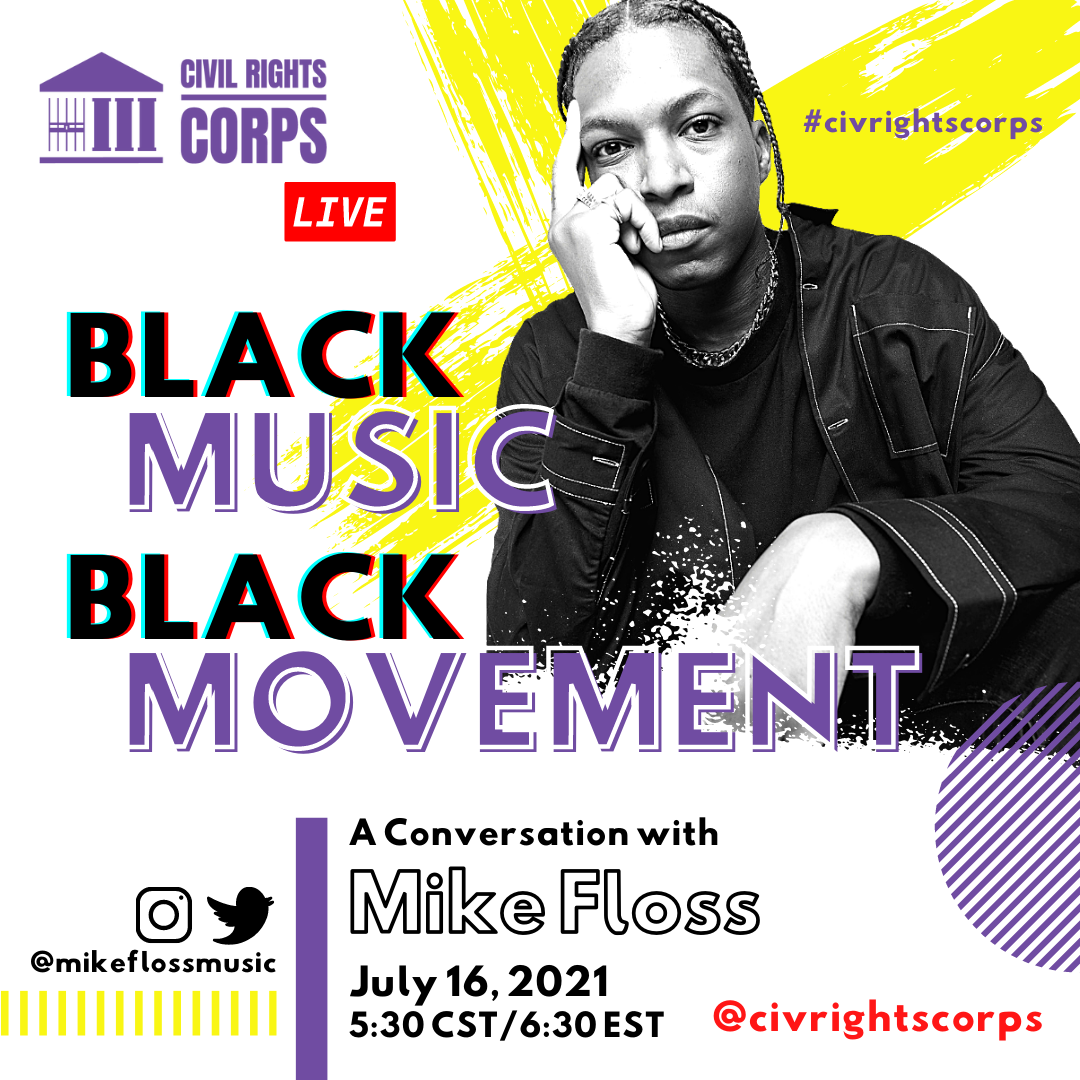 “Take your time, don’t skip steps, be comfortable with the fact that it’s all of our jobs to just push this thing forward.”

Last month, Civil Rights Corps had the opportunity to sit down with our first-ever Musician in Residence, Mike Floss, to hear more about his music, what inspires him, and what he hopes to do at the intersection of music and criminal-legal reform.

These words stood out to us as a reminder of the importance of community in our efforts to end the punishment bureaucracy. As part of our Artist-in-Residence program, we invite you to engage in conversations with our artists and consider how we can work collectively to imagine a world without cages.

This interview has been edited for clarity and length. You can read the full interview here.

Aaron Zeiler (CRC): Can you tell us more about you? How did you start making music?

Mike Floss: All right so yeah, my dad is a musician — well now he does a lot of things but I grew up with him primarily playing jazz music as a trumpet player. So, you know we grew up in a musical house, played instruments in school, you know, marched in a marching band for four years straight in high school, section leader — all that. And just got into you know rapping on the bus, basic very normal story — rapping on the back of the bus freestyling, babbling, going to school — and I just kind of stuck with it. I kind of found my identity through that.

Aaron: What inspires you to make music?

Mike: I think it’s changed. I think originally it was kind of not really knowing where I fit in in the world and kind of finding through doing music I can find a place to be, you know? I was playing basketball but I knew I wasn’t going to the league. It was like I was doing a lot of stuff butI really wasn’t locked in to a spot and I kind of found my place to live through doing music and what motivates me right now is seeing a bigger outcome. If I look at streams where you’re getting streamed all over the world, literally. You get the little updates on your phones, like “oh 500 more plays in France,” “a thousand more plays in Italy,” just as small as that is, it’s like man you really can touch a massive amount of people. So what you say has to [have] something there. I’m gonna have fun at all times but I think what inspires me now is the fact that whatever it is I say, whoever hears it — however many or few people — that is I want to be able to stand behind that for the rest of my life.

Aaron: So what is the message you’re trying to get across right now with your music?

Mike: Right now, I think it’s about honesty. I think it’s about my personal self exploration, you know my experiences, and you know the way I was raised and the values and vices that I struggled with. Also for me the Black experience being vast right, you know. I went to Tennessee State, which is an HBCU in Nashville, and like that showed me the range of Blackness. I thought everybody grew up something close to the way I grew up or the way the friends I had grew up but there wasn’t a very big range in Nashville of Black people. But going to college, you start seeing people that’s from rich families on the West Coast, people that’s from super poor families on the East Coast, and everything in between. And I think I want to contribute my portion of the Black experience to the world.

Aaron: What role do you think music plays in driving change?

Mike: Man, when I look at movements over time like music has been so imperative. I remember watching the Nina Simone doc, and she was talking about how she kind of felt like a fraud making music instead of being on the front lines protesting or whatever. I understand this feeling but I also understand that she was wrong to feel that way because what we needed from Nina Simone was for her to write those songs that help you create a time capsule of the era and also help you get through day by day. A lot of times it’d be like Aretha Franklin’s “Young Gifted and Black” is something we listen to all the time — me and the homies in Nashville — so it’s just one of those things that can lift your spirit because this work is exhausting, you know what i’m saying? It’s a whole lot of… it’s a whole lot of losses honestly whether that’s human life losses or whether that’s you know court cases or whether whatever that is like it’s a lot of losses that come along with fighting such a massive oppressive structure. So to me, contributing the music is just as important as giving somebody a bottle of water you know on a hot day. It’s like you need that just to — even if it’s just something small — to help get through that moment.

Mike: I might have to think about that and come back to it. I’m not sure if I would go with Aretha “Young Gifted and Black,” but the interesting thing is I’ve seen songs like “March Madness” by Future affect people in a way, you know? Where it’s like so many things get said in that song a lot of people don’t even realize how crazy that song is from this vantage point — you know — with all of the things happening simultaneously: the mixed emotions, the chaos, the confusion of being alive right now. And I don’t even know if he was doing that when he wrote that song, but it accurately does that and it slaps at the same time. So it’s, like, I wouldn’t say that’s necessarily one of the songs that are pivotal to the movement, but I do think that’s what I try to create with a little more intention. But I’m gonna get back to you on that I’m gonna find the right song.

Mike: A lot of things man, a lot of things. Specifically, with CRC you know we’re kind of getting the ball rolling on that body of work, which I’m still not sure exactly how that’s gonna take form. So I’m looking forward to that. But also I’m releasing an EP this month as long as all of this video footage makes it by the deadline, which is really just like some cool lyrical rap stuff. I’m also working on an album with a friend, a visual artist friend that I have. He’s got an exhibit coming up top of 2022. So, I’m working on the album that goes along with his work, I don’t want to talk about it too much because that’s more so his thing than mine and I don’t know where he’s at with it, but we’re working on a body of work to go along with his exhibit. I just started working on the album in LA last week so that’ll probably be 2022 as well. And then all along the way I’ve got a hard drive full of singles that’s getting dropped for the rest of the year. So, it’s a lot going on but it’s good.

Aaron: We had a conversation today about what have you achieved so far this year and what you hope to achieve — you’re achieving a lot!

Mike: Yeah, it’s a lot because see you gotta also keep in mind 2022 — I still have all of this stuff from last year that you know my hands was kind of tied on doing anything with. So now that stuff is starting to open back up and people are starting to get more engaged in the industry and just venues opening back up and stuff like that, I’m getting tapped on the shoulder a lot. So fortunately I have a ton of content and a ton of opportunity to make the most out of those songs, but it’s crazy right now, it’s so strange. It just feels like the floodgates just open wide. But it’s a blessing though too because it could be another 2020 and I ain’t trying to do that.

Aaron: What do you hope to do during your residency with CRC?

Mike: Man, what I would really like to do is, one, get more educated on the CRC’s work in Tennessee — that’s really interesting to me, and I want to figure out how I can tap some of the people I’m in community with in Nashville and like maybe bridge some gaps across the state. Also make a body of work that is specifically directed towards this movement you know and make something that will stand the test of time but also be like a time capsule of what’s going on right now and make that from an informed place. I’ve never worked on an album with so much research involved, you know? So that’s interesting because it’s challenging me creatively but it’s also giving me a wealth of like emotions and creativity to pull from that. Before, I would only be pulling strictly from my life experience pretty much but now I feel like I’m pulling from you know a million stories, so It’s really interesting. And it’s kind of heavy, but I hope to make the music not be too too heavy and real easy to listen to but also important.

Aaron: Is there anything else that you think is important to say that I didn’t ask or just like a message you’d want to leave with people?

Mike: The message I would leave with people is take your time, that’s my message. A lot of times with this stuff it feels like you got to change the world today and you really can’t. That’s the reality of it. It’s a consistent thing. It’s like, if you start working out, you’re not going to be able to run that triathlon today on your first day back in the gym; you’re not going to be able to do it. If you can do it, you’re probably going to hurt yourself. So take your time, don’t skip steps, be comfortable in the fact that it’s all of our jobs to just push this thing forward a little bit more while we’re here on this planet and then after us it’ll be someone else. So yeah, as long as we take our time, we do it right, we do it from the right mentality in the right emotional and spiritual state, we’re gonna be straight.

Aaron: Thank you so much.